With California’s ongoing drought creating ever-increasing awareness about the importance of efficiently using our precious water supplies, many property owners are opting to replace turf with less water-intensive plants. The Stay Green team reports that turf replacement is all the rage this summer.

On large slope areas, he says, acacia is popular — and it’s not necessarily a ground cover, but a low-growing shrub that blankets a slope. 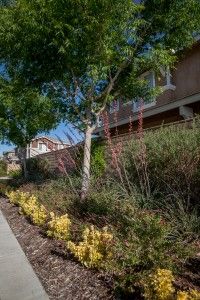 Stay Green Operations Manager Grant Clack says the Stay Green team is always on the lookout for turf areas that are good candidates for water-saving replacement — such as turf areas that aren’t utilized as athletic fields or children’s play areas. “We’re proposing a lot of turf replacement, especially in areas where there are a lot of rebates available,” he says.

For example, the Castaic Lake Water Agency in the Santa Clarita Valley offers turf replacement rebates for large landscaped areas, and even has a new turf alternatives website, http://clwa.org/plants/

Grant says it’s difficult to generalize how much water is saved when turf is replaced, because there are so many variables from one property to the next.

But, he says, turf replacement projects are often accompanied by irrigation changes, and switching from traditional irrigation to drip irrigation reduces water use by approximately 30 percent — in addition to any changes realized by changing the plantings.

He adds: “You are definitely going to be saving by switching from overhead to drip, and switching away from turf.”

Ask us about turf alternatives that may help your clients!