June 25, 2012
By Stay Green Inc.
If it sounds catastrophic, that’s because it can be: “Sudden limb failure,” also known as “Summer Branch Drop,” is a phenomenon in which healthy-looking tree limbs suddenly and without warning fall to the ground.

The potential for property damage and personal injury is, of course, significant when a tree limb 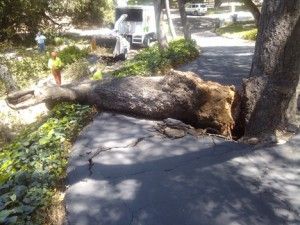 weighing hundreds of pounds unexpectedly falls to the ground — or whatever else it may hit first. That’s why it’s so important that tree limbs are pruned properly at all times of year, including the summer.

Yes, believe it or not, even summer. Even with no wind. On a calm summer day it is not uncommon for a large tree limb to just fall to the ground. Officials at the City of Santa Clarita are telling Stay Green’s team that there have already been several instances of “Summer Branch Drop” in the area this summer.

The consequences can be devastating to property and can even be dangerous to people: In 2008, a 16-year-old girl was killed in England when a car in which she was traveling was struck by an oak tree branch that fell from a tree overhanging the road. (See news story.)

The phenomenon occurs during hot weather, and the prevailing theory about its cause is that, due to high transpiration of moisture through foliage, demand increases for roots to absorb water, and the thirsty limbs end up sucking up too much water, making them too heavy and causing large branches to fail.

It’s most common for branches that fail to be long, horizontal ones, rather than those that extend in a more upright fashion. In our area, the trees most commonly linked with Summer Branch Drop are eucalyptus, oak, pine, elm, cedar, ash and sycamore. 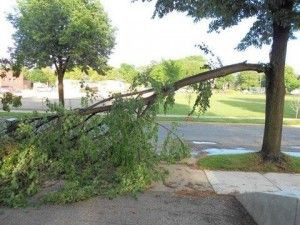 If you have older trees on your property that may be susceptible to Summer Branch Drop, it would be advisable to keep the ground beneath them clear of anything that could be damaged if a branch were to fall.

And, of course, as with most problems with landscape vegetation, the keys to prevention are proper irrigation and pruning of trees and shrubs, to ensure that all plants on a landscaped property get the right amount of water — not too much and not too little — and have the space they need to be healthy and thrive.

That’s where Stay Green’s team of experts comes in. If you have trees that might fall victim to Summer Branch Drop, contact us right away to make sure you need us for prevention, rather than cleanup.